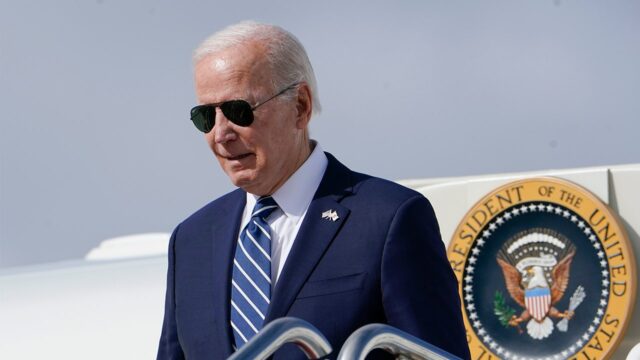 President Biden is taking a weekend trip to his Rehoboth Beach, Delaware home just over one week after classified documents were found at his other Delaware home.

During a press briefing on Friday, Press Secretary Karine Jean-Pierre declined to share if his trip to Rehoboth Beach is due to classified documents being found at his Wilmington home.

“The president is going to his home in Rehoboth Beach today. Does that have anything to do with classified documents being found at Wilmington and nothing being found in the other home?,” a reporter asked.

“I’m just going to continue to be prudent and consistent and respect the Department of Justice process. As it relates to his travel, as you know, he often travels to Delaware on the weekends. I just don’t have anything else to share,” Jean-Pierre responded.

During a trip to California on Thursday to tour storm damage, Biden said that he has “no regrets” over his handling of the classified documents in deciding not to reveal their existence when discovered, which was less than a week before the midterm elections.

“I think you’re going to find there’s nothing there. I have no regrets. I’m following what the lawyers have told me they want me to do. It’s exactly what we’re doing. There’s no there there,” Biden said.

“We found a handful of documents were filed in the wrong place,” Biden added. “We immediately turned them over to the Archives and the Justice Department. We’re fully cooperating and looking forward to getting this resolved quickly.”

Biden told Fox News’ Peter Doocy on Jan. 12 that the classified documents were in a locked garage.

“Classified documents next to your Corvette? What were you thinking?” Doocy asked Biden.

“I’m going to get the chance to speak on all of this, God willing it’ll be soon. But I said earlier this week — and, by the way, my Corvette is in a locked garage — it’s not like it’s sitting out in the street,” Biden responded.

“So the documents were in a locked garage?” Doocy asked.

Then-presidential candidate Joe Biden is seen backing into what appears to be his Wilmington, Delaware driveway in a 2020 campaign video.
(Joe Biden 2020)

“Yes, as well as my Corvette. But as I said earlier this week, people know I take classified documents and classified material seriously,” Biden said. “I also said we’re cooperating fully and completely with the Justice Department’s review.”