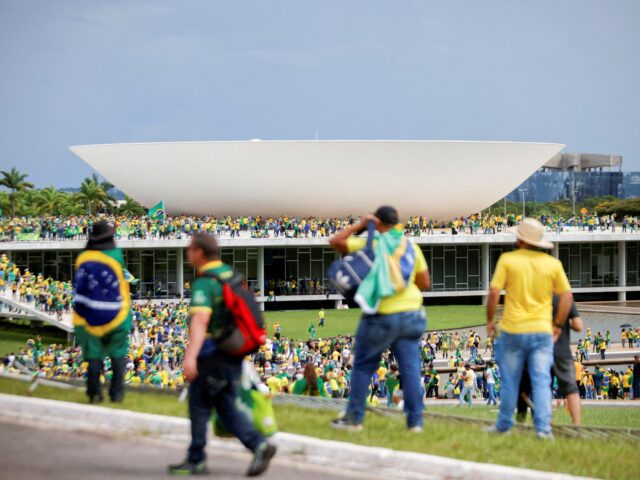 Brazil’s President Lula has suggested the pro-Bolsonaro rioters acted with help from inside the government.

Brazil’s defence minister, Jose Mucio, has said the country’s armed forces were not directly involved in the January 8 attack on the seat of government in Brasilia, led by supporters of former far-right President Jair Bolsonaro.

Mucio’s declaration followed a meeting between President Luiz Inacio Lula da Silva and chiefs of the army, navy and air force on Friday, the first such gathering since the riots.

“I understand that there was no direct armed forces involvement, but if any element participated, they will have to answer as citizens,” Mucio told reporters on Friday.

He added that government buildings would not be stormed again because the armed forces would “anticipate it”.

His statement comes as the government has promised to hold to account those who enabled or participated in the riots.

One of the figures currently under investigation is the governor of Brasilia, Ibaneis Rocha, who was suspended from his post in the hours after the attack. On Friday, federal police raided his home and workplaces as part of a probe into his failure to stop rioters from entering Brasilia’s government buildings.

During the attack, Bolsonaro supporters stormed the presidential palace, Supreme Court and Congress in a bid to trigger a military intervention that they hoped would pave the way for Bolsonaro’s return to power.

Bolsonaro narrowly lost his bid for reelection to Lula in an October run-off.

A former army captain, Bolsonaro leaned into anti-democratic rhetoric in the months leading up to the election. Following his loss, some of his supporters called for a military coup. The attack on January 8 included acts of vandalism and was widely condemned as an attack on Brazilian democracy. It came a week after Lula was sworn into office.

Nearly 1,400 of those arrested in connection to the riots remain in custody and the public prosecutor has charged at least 39 people so far.

Lula said he believes the rioters acted with help from inside the government and has fired more than 50 soldiers from his security detail.

Bolsonaro, who has refused to officially acknowledge Lula’s victory, left the country for Florida, in the southeast United States, before the riots took place. He too is being investigated by Brazil’s Supreme Court for any role he potentially played in the riots.

Bolsonaro’s former Minister of Justice Anderson Torres was also arrested after police discovered a document in his home that appears to be a draft decree laying the groundwork for overturning the election results.

The document’s origin and authorship have yet to be confirmed, and Torres has denied any wrongdoing. Torres had likewise travelled to Florida before the riots but came back when the government threatened to file an extradition request if he did not return to Brazil voluntarily.

Torres was serving as Brasilia’s security chief when the riots occurred and was swiftly removed from his position on the day of the riot.

In addition to Friday’s raid on the home and offices of Governor Rocha, similar raids have taken place in five different Brazilian states, as federal police execute 24 warrants across the country.

In a statement on Friday, the federal police said their purpose was to “seek evidence to support the inquiry into the conduct of public authorities who might have failed in their obligation to prevent the violent acts that day in Brasilia”.

Rocha has denied involvement in the January 8 attack and was not present during Friday’s police raids. His lawyer, Cleber Lopes, struck a defiant tone with reporters.

“We are absolutely calm, there is nothing to hide. This raid, it is unnecessary and fruitless,” Lopes said.

Minister for Justice Flavio Dino has praised the investigations into what he characterised as “crimes against our country by coup-mongers and their allies”.