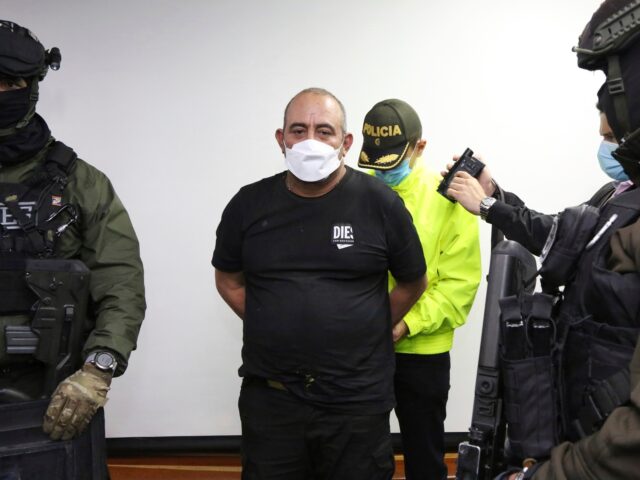 Dairo Antonio Usuga David, known as ‘Otoniel’, was leader of the Gulf Clan, one of Colombia’s largest paramilitary groups.

A former Colombian drug trafficker has admitted to overseeing a vast network of criminal operations and cocaine smuggling, including a violent paramilitary group known as the Clan del Golfo or the Gulf Clan cartel.

“Tons of cocaine were moved with my permission or at my direction,” he told the court.

“There was a lot of violence with the guerrillas and the criminal gangs,” he added, acknowledging that “in military work, homicides were committed”.

Otoniel was once one of the most wanted drug traffickers in the world and was arrested by Colombian authorities in October 2021 after eluding capture for years. He was extradited to the US in May 2022.

Prosecutors have accused Otoniel of smuggling “outrageous” amounts of cocaine into the US, and he faces a minimum sentence of 20 years in prison. As part of an extradition deal with Colombia, US prosecutors agreed they would not seek a life sentence in his case. A sentencing date has yet to be decided.

The Gulf Clan, also known as the Gaitanist Self-Defense Forces, have enlisted thousands of recruits to clash with Colombian authorities, paramilitary groups and rival gangs.

Otoniel admitted that the group administered “taxes” on cocaine produced, stored or transported through its territory by other groups. Prosecutors allege that he ordered the killing and torture of perceived enemies.

“With today’s guilty plea, the bloody reign of the most violent and significant Colombian narcotics trafficker since Pablo Escobar is over,” Brooklyn US Attorney Breon Peace said in a statement.

Usuga’s defence lawyer Paul Nalven said that his client was “very remorseful” about his role in the “cycle of violence”. Nalven stated that Usuga received only a fourth-grade education and was pulled into “guerrilla” warfare in Colombia when he was 16.

For years, drug trafficking has contributed to a legacy of violence that has touched the lives of millions of Colombians, and authorities have used harsh measures to go after criminal organisations like the Gulf Clan.

However, the militarised approach has brought mixed results and has helped fuel allegations of human rights abuses by the government.

In a report released in June detailing the country’s nearly six-decade civil conflict, Colombia’s Truth Commission said government drug policies had prolonged the fighting. More than 450,000 people have been killed in the conflict between government forces, paramilitary organisations, cartels and left-wing rebel groups.

Under a policy called Plan Colombia, launched in 2000, the US poured money and military assistance into the country to combat left-wing rebels and drug cartels.

Colombia’s government strategy shifted in the mid-2010s, with officials signing a 2016 peace accord with the Revolutionary Armed Forces of Colombia (FARC), the largest rebel group at the time.

Still, the illegal cocaine trade has remained prominent in Colombia, the world’s largest producer of the drug. In 2022, the United Nations said that the previous year’s crop of coca, the raw ingredient for cocaine, covered 204,000 hectares (500,000 acres) — the largest area recorded in decades.

The Truth Commission’s report recommended sweeping changes to Colombia’s drug policies, and current President Gustavo Petro, a former member of an armed rebel group, has pushed for negotiations with armed groups since his election in June 2022.

Earlier this month, Petro announced that the government would decrease its emphasis on forced coca plant eradication, a staple of its anti-drug policy for years.