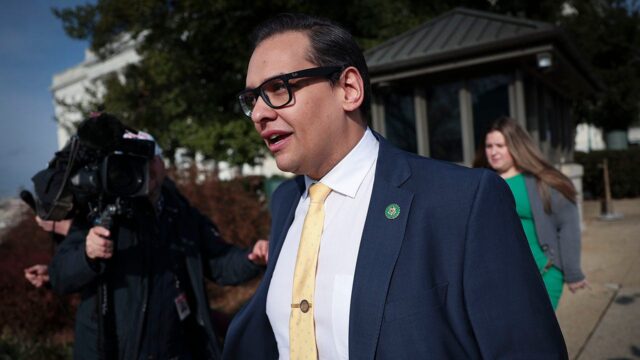 “The reports that I would let a dog die is shocking & insane,” Santos, who was shunned by the Nassau County GOP for lying on his resume about his Jewish heritage, college degree and Wall Street career, tweeted. “My work in animal advocacy was the labor of love & hard work. Over the past 24hr I have received pictures of dogs I helped rescue throughout the years along with supportive messages.”

“These distractions won’t stop me!” he added.

The Patch first reported that Richard Osthoff, a homeless veteran honorably discharged from the Navy in 2002, claimed he was connected to Santos’ pet charity in 2016 after finding out his pit-bull mix service dog, Sapphire, developed a life-threatening stomach tumor and needed surgery.

Osthoff and another New Jersey veteran, retired police Sgt. Michael Boll, told the Patch that Santos – who went by the name Anthony Devolder at the time – closed the GoFundMe page after it raised $3,000 and took off with the money. Osthoff said his dog died in 2017 despite him panhandling for the cash to try to save her.

Amid a slew of ethic probes into the sources of his campaign funding, Santos has rebuffed calls to resign from New York congressional Democrats and Republicans alike.

His resume lies were first exposed by The New York Times in December – after the election – leading to questions into both how much GOP leadership and insiders knew of Santos’ fraudulent claims to voters, and why opposition research by Democrats did not expose some of Santos’ more easily verifiable fabrications sooner.

More recent reporting has revealed that Santos worked more than a year and a half for a company accused in Florida federal court of being a Ponzi scheme, and suggested that Santos could have orchestrated a “straw donor” scheme in disguising campaign contributions from undisclosed individuals or corporations as income earned through Devolder, Inc., a supposed consulting firm he founded in 2021, and had business ties to the cousin of a sanctioned Russian oligarch and convicted Stormy Daniels hush-money fixer Michael Cohen early on in his political career.

Santos is facing a House Ethics Committee investigation, and House Speaker Kevin McCarthy has said the first-year congressman will be allowed to serve in Congress unless the result of the ongoing probe finds he violated federal campaign finance laws. Despite the probe, Santos was recommended for two low-level committee assignments, to serve on the Committee on Small Business and the Committee on Science, Space, and Technology, according to reports.

The New York Times reported Wednesday that immigration documents reveal that Santos’ mother was unable to come to the United States in June 2001, because her green card had been stolen in Brazil. Those records, therefore, contradict Santos’ claims that his mother was working at the World Trade Center at the time of the 9/11 terrorist attacks.

Danielle Wallace is a reporter for Fox News Digital covering politics, crime, police and more. Story tips can be sent to danielle.wallace@fox.com and on Twitter: @danimwallace.