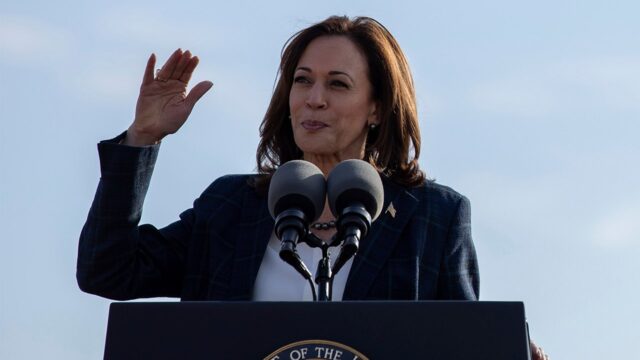 Vice President Kamala Harris visited Arizona on Thursday to attend a groundbreaking ceremony for an energy infrastructure project, where she defended her decision not to visit the southern border.

The vice president was in Tonopah, Arizona, which is nearly 100 miles away from the border with Mexico. She was there for the groundbreaking ceremony of a 125-mile-long transmission line that will deliver wind and solar energy to homes and businesses around the area.

“I am here to talk about what we are doing around bringing down the cost to American families and creating jobs,” Harris told local news station KPHO, when asked why she did not plan a border visit. “Let me say on the border that it is one of our highest priorities to continue to work on making sure that the border is secure and that we also do what is necessary to have a fair and humane system.

Though tasked by President Biden to investigate the root causes of the migrant crisis overwhelming border states, Harris has only visited the southern border once since taking office, in 2021.

“I visited the border. I will not on this trip, but I have, and I will again,” Harris told KPHO.

The vice president’s office did not immediately respond when asked for a timeframe of Harris’ next visit to the border.

Immigrants wait to be processed by the U.S. Border Patrol after crossing the border from Mexico, with the U.S.-Mexico border barrier in the background, on Aug. 6, 2022, in Yuma, Arizona.
(Qian Weizhong/VCG via Getty Images)

Harris has spent three days in Latin America on two separate trips in her role. The last public appearance Harris made on the topic of immigration was on June 15, according to a tracker of Harris’ scheduled events and meetings from the Los Angeles Times. Harris had 20 events on immigration as vice president, with all but three taking place in 2021.

Southern border encounters have hit more than 200,000 each month since June, according to Customs and Border Protection. These numbers are expected to increase after the pending expiration of the Title 42 policy that allows agents to turn away migrants in order to stop the spread of COVID.