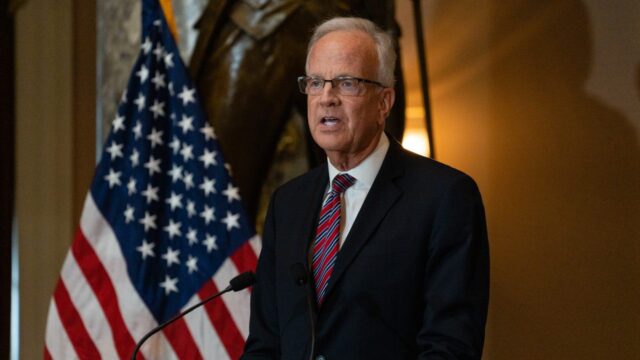 The FBI is investigating allegations that cyber criminals stole nearly $700,000 from Kansas Republican Senator Jerry Moran’s campaign, according to a letter the campaign sent to the Federal Elections Committee.

On Dec. 8, 2022, Moran campaign treasurer Timothy Gottschalk notified the FEC of “fraudulent activity by a third-party cyber-criminal” that was included in the campaign’s finance reporting, according to a Form 99 filing.

Moran’s campaign informed the FEC that on Nov. 14, their office was contacted by Astra Bank and notified of potentially fraudulent activity concerning two wire transfers to SRCP Media Inc. that totaled $690,000.

FROM PHISHING SCAMS TO PROPAGANDA: HOW RUSSIA, ROGUE NATIONS UTILIZE CYBER CAPABILITIES AGAINST THE US

Sen. Jerry Moran, a Republican from Kansas, speaks during a ceremony unveiling a statue of Amelia Earhart in Statuary Hall at the U.S. Capitol in Washington, D.C., July 27, 2022.
(Eric Lee/Bloomberg via Getty Images)

Federal Bureau of Investigation emblem is seen on the headquarters building in Washington D.C., Oct. 20, 2022.
(Beata Zawrzel/NurPhoto via Getty Images)

The letter states that Moran’s campaign reported the alleged theft to the Republic County Kansas Sheriff’s Office on Nov. 16. From there the case was transferred to the Federal Bureau of Investigation and remains under investigation.

On Nov. 23, Moran’s campaign was notified by Astra Bank that $168,184.03 of the Nov. 9 wire transfer was recovered from Wells Fargo Bank, according to the letter.

Fox News has reached out to Moran’s office for comment.

“Cyber criminals targeted the accounting firm employed by Moran For Kansas and money was wired to fraudulent bank accounts,” a Moran campaign spokesman told the Kansas City Star. “As soon as a discrepancy was realized, it was reported to law enforcement.”

“We are currently pursuing all avenues available to recover the money and there is an ongoing investigation with the FBI,” the spokesman added.

Moran handedly won reelection to a third term in the Senate in November, defeating Democrat Mark Holland 60.1% to 36.9%. Moran’s campaign spent more than $4.6 million in the 2022 election cycle, according to FEC filings.