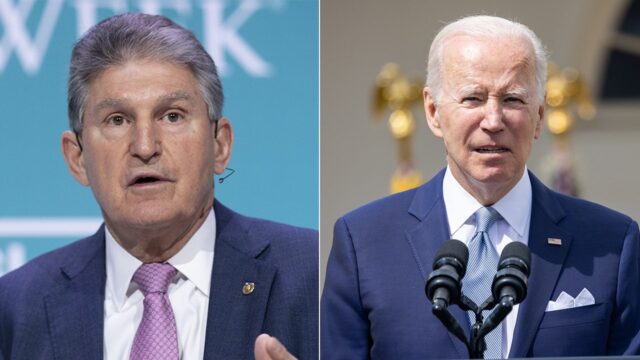 Sen. Joe Manchin, D-W.Va., said Sunday that President Biden should have “a lot of regrets” over his mishandling of classified documents that has led to a federal investigation and search of his Wilmington, Delaware, home.

Biden raised eyebrows last week after he declared he had “no regrets,” after several batches were discovered at his home and the Penn Biden Center in Washington, D.C.

Manchin told “Meet the Press” anchor Chuck Todd the controversy could likely be blamed on human error, but that the president should at least admit he was “irresponsible.”

“To put those in unsecure spaces is irresponsible,” Manchin said. “I think he should have a lot of regrets.”

“I’m going hold someone accountable, but basically the buck stops with me,” he said. “We’re all human and make mistakes. I can tell you, I don’t think anyone intended – he sure didn’t intend for it to fall in the wrong hands and use it against our country. I know he didn’t intend that to happen. Could it have happened? I don’t know. And, yeah, you just might as well say, ‘Listen, it’s responsible. It was something we should have had a better check and balance on.’”

While touring California to observe storm recovery efforts on Thursday, Biden said, “We’re fully cooperating and looking forward to getting this resolved quickly.”

“We found a handful of documents were filed in the wrong place,” Biden said. He added: “I think you’re going to find there’s nothing there. I have no regrets. I’m following what the lawyers have told me they want me to do. It’s exactly what we’re doing. There’s no there there.”

General view of the gate to the access road leading to the home of President Joe Biden in Wilmington, DE on Thursday, January 12. 2023.
(Dario Alequin for Fox News Digital)

During a press briefing, White House press secretary Karine Jean-Pierre announced Biden was retreating to his home in Rehoboth Beach, Delaware, for the weekend. Asked what he meant when he said “no regrets,” Jean-Pierre refused to comment further.

BIDEN SLAMMED FOR SAYING HE HAS ‘NO REGRETS’ ABOUT CLASSIFIED DOCUMENTS: ‘WHITE HOUSE KEEPS STONEWALLING’

Jean-Pierre refused to comment on additional follow-up questions, letting “the president’s words stand for itself.”

The White House said Biden attorneys discovered Obama administration-era classified documents and official records on four separate occasions — on Nov. 2 days before the midterm elections at the offices of the Penn Biden Center in Washington, on Dec. 20 in the garage of the president’s Wilmington home, and on Nov. 11 and 12 in the president’s home library. The discoveries only became public this month after CBS News broke the story and the White House was forced to respond.

On Saturday, the FBI searched Biden’s Wilmington home and found additional classified documents dating back to the president’s time as a senator.

Attorney General Merrick Garland appointed Robert Hur, a former Maryland U.S. attorney, to serve as special counsel to oversee an inquiry into the documents. The special counsel investigation into Biden was launched just months after a similar one into former President Donald Trump, who kept classified documents at his Mar-a-Lago property in Florida. In that case, the FBI raided Trump’s property after the agency suspected there were more documents than previously believed based on interviews and failed negotiations to hand them over. Trump has claimed he did no wrong in the matter.

The White House has emphasized that Biden’s case is different because his team cooperated with the DOJ and National Archives, while Trump’s team resisted requests to turn over the classified documents.

Manchin appeared to agree with that assessment Sunday, but said the duel investigations of two presidents is still incredible.

“I mean, it’s just hard to believe that in the United States of America we have a former president and the current president basically in the same situation. How does this happen?” he asked.

“Is one more reckless and irresponsible than the other? I can’t answer that question,” he said. “But I think the special counsel will do a better job than the politicians and the political circus that’s going to follow.”

Jessica Chasmar is a digital writer on the politics team for Fox News and Fox Business. Story tips can be sent to Jessica.Chasmar@fox.com.

10 Democrats who have vowed support for Biden in 2024 as voters await his...