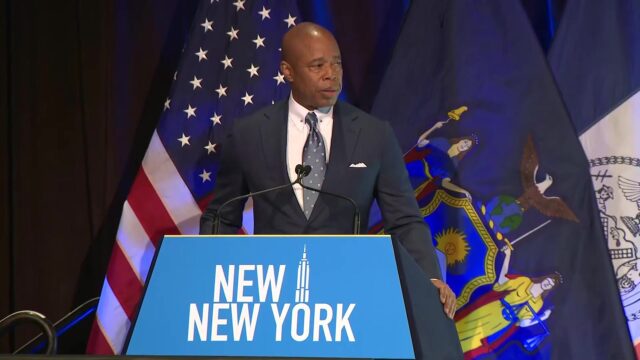 New York City launched a plan Wednesday to become the first city in the nation to distribute free abortion drugs at its health clinics.

A sexual health clinic in the Bronx began to offer free chemical abortion pills Wednesday and three other clinics will do so by the end of the year — a plan that Democratic Mayor Eric Adams declared “no other city in the nation or in the world” has launched. The efforts are part of a $1.2 million city fund for sexual health services.

“For too long, health and health care has been centered around men,” Adams said in a Tuesday press conference on women’s health. “If men had periods, pap smears and menopause, they would get a paid vacation. And if men could get pregnant, we wouldn’t see Congress trying to pass laws restricting abortion.”

City officials said the boost to sexual health clinics in the city is an attempt to counter restrictions on abortion after the overturn of Roe v. Wade last year. Abortion pills are available in the city’s 11 public hospitals, but the new plan extends this to four public health clinics, where they will be provided free of charge.

Ashwin Vasan, commissioner of the New York City Department of Health and Mental Hygiene, said that the free abortion pills will be “open to anyone.”

“This is city dollars going to this specific purpose, and we’re the first in the nation to do that,” Vasan said.

Abortion pills are taken to terminate a fetus through the first 10 weeks of a pregnancy. Medical studies and data show abortion pills have four times the complication rate of surgical abortions due to concerns over intense hemorrhages and bleeding.

The rate of emergency room visits after the use of abortion pills increased more than 500% between 2002 and 2015, according to government data collected by the Charlotte Lozier Institute. The pills are often taken without medical supervision.

The Food and Drug Administration has made a series of moves to deregulate abortion pills amid the Biden administration. The agency in January announced that it will allow retail pharmacies such as CVS and Walgreens to distribute abortion drugs as women are prescribed the pills from certified health care providers.

Just over one year prior, the agency made permanent its pandemic-era decision to allow doctors to prescribe abortion pills through remote appointments and to mail them to women through certified providers.

The popularity of abortion pills has increased steadily since they were approved in the U.S. in 2000. The pills accounted for more than half of U.S. abortions for the first time in 2020, which is likely to increase after the Roe overturn and FDA deregulation efforts. This does not include the use of black market abortion pills, which have grown in popularity since the overturn of Roe.

Patrick Hauf is a politics writer for Fox News Digital.

Cowboys’ Micah Parsons rips critics for his praise of Eagles ahead of Super Bowl:...