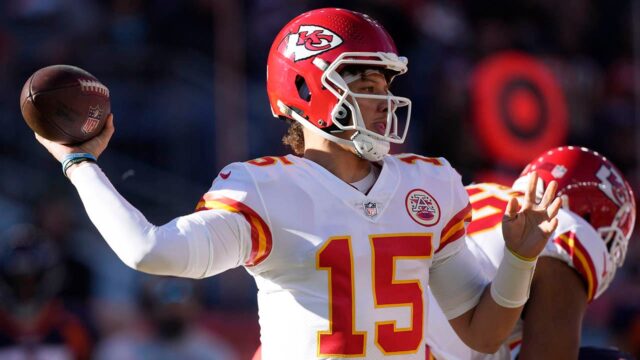 The NFL MVP finalists have been named for the 2022 season, and three of them are also up for the Offensive Player of the Year award.

The award was already voted on by 50 media members that regularly cover the NFL nationwide prior to the playoffs starting. The award will be announced on Feb. 9 at the NFL Honors.

Jalen Hurts #1 of the Philadelphia Eagles reacts prior to a game against the New York Giants in the NFC Divisional Playoff game at Lincoln Financial Field on January 21, 2023 in Philadelphia, Pennsylvania.
(Mitchell Leff/Getty Images)

Mahomes is considered the front-runner after throwing for 5,250 yards with 41 touchdowns in the regular season. He already has an MVP under his belt following his coming-out sophomore 2018 season with 5,097 yards and 50 touchdowns thrown with a 113.8 passer rating.

While he knows he’s in the MVP conversation, Mahomes is focused on an AFC Championship rematch against Burrow and the Bengals this Sunday. Mahomes is battling a high-ankle sprain that he suffered against the Jacksonville Jaguars in their 27-20 AFC divisional round victory.

Hurts delivered an exceptional season with his arm and legs, passing for 3,701 yards and rushing for 760 yards to combine for 35 touchdowns. His performance alongside weapons like A.J. Brown, Miles Sanders and DeVonta Smith has led the Eagles to the No. 1 seed in the NFC and the NFC Championship at Lincoln Financial Field on Sunday against the San Francisco 49ers.

Jefferson is the only non-quarterback in the MVP finalists group, but he certainly deserves a place there after totaling 128 catches with 1,809 yards and eight touchdowns this season with the Vikings.

Mahomes, Hurts and Jefferson are also up for Offensive Player of the Year.

Minnesota Vikings’ Justin Jefferson runs during the first half of an NFL football game against the Detroit Lions Sunday, Dec. 11, 2022, in Detroit.
(AP Photo/Paul Sancya)

As for the AP Defensive Player of the Year award, the 49ers’ Nick Bosa, Chiefs’ Chris Jones and Cowboys’ Micah Parsons are the finalists in that category.

Bosa’s 18.5 sacks this season make him the top dog at the moment, while Jones finished the year with 15.5 and Parsons with 14.5. Bosa and Jones will hope for more this weekend and potentially in the Super Bowl.

Daboll came into a Giants organization that went 4-13 last season and have been stuck at the bottom of the league since their last playoff berth in 2016. That all changed when they went 9-7-1, and though it was voted on prior to the playoffs beginning, he also upset the No. 3 Vikings in the wild-card round to get the team’s first playoff victory since Super Bowl XLVI.

Head coach Brian Daboll of the New York Giants in action against the Washington Commanders at MetLife Stadium on December 04, 2022 in East Rutherford, New Jersey. The game ended in a 20-20 tie.
(Jim McIsaac/Getty Images)

Pederson also turned around a franchise, as the Jaguars had a 9-8 record at the end of the regular season, cementing their spot as AFC South champions. And similarly to the Giants, they won their wild-card round matchup, pulling off a miraculous upset of the Los Angeles Chargers after being down 27-0 in the game.

Finalists for the following awards have been named as well.

Scott Thompson is a sports writer for Fox News Digital.