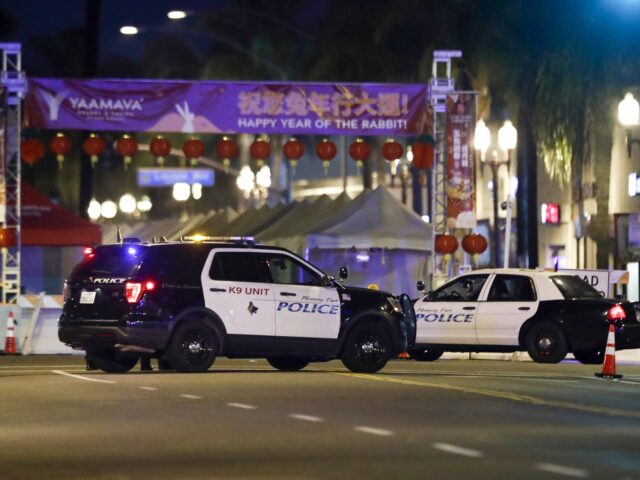 At least 10 people have been killed and 10 injured in a mass shooting east of Los Angeles following a Lunar New Year celebration that attracted thousands, police said.

Police said the shooting, which took place late on Saturday, occurred at a ballroom dance club on Garvey Avenue in Monterey Park.

Captain Andrew Meyer of the Los Angeles Sheriff’s Department said people were “pouring out of the location screaming” when officers arrived at the venue around 10:30pm (06:30 GMT Sunday).

The male suspect is still at large, said Meyer, who could not immediately offer a description of the alleged attacker or the weapon used.

Meyer said it was too early in the investigation to know if the gunman knew anyone at the ballroom or if it was a crime motivated by hate. He also said police were investigating another incident in the nearby city of Alhambra to see whether it was connected.

“We will look at every angle,” he said.

As a result of the shooting, the police said Lunar New Year festivities in Monterey Park for Sunday have been cancelled.

“We are waiting for the names [of those deceased] and the motive of the suspect,” he added. “A lot of the people who have gathered out here from the community are in shock.”

Monterey Park is a city of about 60,000 people with a large Asian population that’s about 16km (10 miles) from downtown Los Angeles.

“Our hearts go out to those who lost loved ones tonight in our neighboring city, Monterey Park, where a mass shooting just occurred,” Los Angeles City Controller Kenneth Mejia said in a tweet.

Our hearts go out to those who lost loved ones tonight in our neighboring city, Monterey Park, where a mass shooting just occurred. Monterey Park is home to one of the largest Asian communities in Los Angeles County and many were out celebrating the Lunar New Year.

Seung Won Choi, who owns the Clam House seafood barbecue restaurant across the street from where the shooting happened, told the Los Angles Times that three people rushed into his business and told him to lock the door.

The people also told Choi that there was a shooter with a machine gun who had multiple rounds of ammunition on him so he could reload.

Choi said he believes the shooting took place at a dance club.

Meanwhile, local resident Wong Wei told the newspaper that his friend had been at the dance club, and had been in the bathroom when the shooting erupted.

When she emerged, she saw a man carrying a long gun and firing indiscriminately, as well as the bodies of three people, two of them women and one person who he said was the boss of the club. The account could not immediately be verified.

Saturday was the start of the two-day festival, which is one of the largest Lunar New Year events in southern California.

The incident marks the fifth mass shooting in the US this month and the deadliest since 21 people were killed in a school in Uvalde, Texas, according to the AP/USA Today database on mass killings in the US.

The latest violence comes two months after five people were killed at a Colorado Springs nightclub.

Mass shooting remain common in the US, which saw 647 shootings with four or more victims in 2022, according to the Gun Violence Archive website.

Meanwhile, the Federal Bureau of Investigations (FBI) reported last year there had been 61 “active shooter” incidents in the US in 2021, up 52 percent from 2020 and the highest on record.

The department defined an “active shooter” as someone engaged in killing or attempting to kill people in a public space in a seemingly random fashion. About one in five “active shooter” incidents in 2021 were also mass killings.

Despite the high-rate of gun violence, federal gun controls have remained a political sticking point.

While the administration of President Joe Biden last year signed into law the most significant gun safety legislation in decades, gun control advocates said the gains in the legislation were relatively modest. They included strengthening background checks, funding laws to remove firearms from people considered to be a threat and closing a loophole that allowed some people accused of domestic abuse to own guns.

Wider reforms, including higher age restrictions for gun purchases and federal ban on assault weapons – the firearm of choice for many mass shooters – were not included in the package.