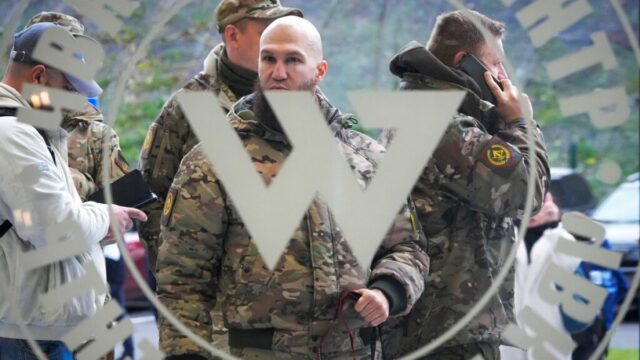 The United States has designated Russia’s Wagner mercenary group as a “transnational criminal organisation”, piling pressure on the private army that has recruited tens of thousands of Russian prisoners to fight in Ukraine.

Wagner “is a criminal organisation that is committing widespread atrocities and human rights abuses”, Kirby said.

“We will work relentlessly to identify, disrupt, expose and target those who are assisting Wagner,” he said.

Kirby also showed US intelligence photographs of North Korea apparently supplying arms to Wagner for its Ukraine operations, and said the private mercenary force has become a rival to the formal Russian military.

The photographs, from November 18-19, show Russian rail cars entering North Korea, picking up a load of infantry rockets and missiles, and returning to Russia, Kirby said. He said the US Treasury was formally designating Wagner as a transnational criminal organisation, putting it in league with the Italian mafia and Japanese and Russian organised crime.

The designation will allow a wider application of sanctions against the group’s sprawling global network, which includes mercenary operations as well as businesses in Africa and elsewhere.

Declaring Wagner a “Transnational Criminal Organization” under US executive order 13581 freezes any US assets of Wagner and prohibits US nationals from providing funds, goods or services to the group.

Prigozhin, asked for reaction to Kirby’s comments on Friday, did not directly address the US accusations but said they showed that Wagner and the US were “colleagues” who were both involved in “dismantling criminal clans”, an apparent reference to Russia’s claim that its war is designed to remove what it calls Ukraine’s illegitimate government.

Kirby also said there is evidence that Prigozhin’s confidence in his fighters’ relative success in Ukraine has generated tensions within the Kremlin.

“Wagner is becoming a rival power centre to the Russian military and other Russian ministries,” Kirby said.

“Prigozhin is trying to advance his own interest in Ukraine and Wagner is making military decisions based largely on what they will generate for Prigozhin, in terms of positive publicity.”

Prigozhin has claimed credit for Russian advances over several months towards the eastern Ukrainian city of Bakhmut, including the capture last week of the neighbouring town of Soledar.

On Thursday, Prigozhin said in a press statement that Russia had “a lot to learn” from Ukraine’s army. But he insisted “the settlement of Artemovsk will be captured”, using the Russian name for Bakhmut.

Prigozhin’s rivals in the Kremlin

The Wagner mercenary force was founded in 2014 and has been involved in conflicts in Africa, Latin America and the Middle East. But, Prigozhin’s infighting with officials in the Kremlin could be hurting him.

According to the US’s Institute for the Study of War, Putin “is increasingly siding with” Prigozhin’s rivals in high-level power circles.

Putin has also not directly credited Wagner with the Bakhmut area successes, the institute noted.

“Putin is likely attempting to reduce Prigozhin’s prominence in favour of the re-emerging professional Russian military and Russian government officials,” the group said on Thursday.

Last month, US Secretary of State Antony Blinken announced he had designated the Wagner Group as an “entity of particular concern” for its activities in the Central African Republic.

Wagner has been under US sanctions since 2017. The Commerce Department last month unveiled new export restrictions targeting Wagner in a bid to further limit its access to technology and supplies.

The European Union imposed sanctions on Wagner in 2021 and named individuals linked to the group for their involvement “in serious human rights abuses, including torture and extrajudicial, summary or arbitrary executions and killings”.

Wagner had been involved “in destabilising activities in some of the countries they operate in, including Libya, Syria, Ukraine (Donbas) and the Central African Republic. The group is also spreading its malign influence elsewhere, notably in the Sahel region,” the EU said.