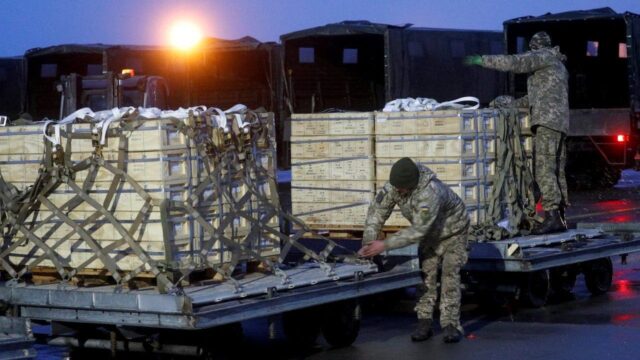 The Pentagon announced Thursday that it is sending an additional $2.5 billion in military aid to Ukraine, including 90 Stryker combat vehicles for the first time and another 59 Bradley fighting vehicles.

Missing from the latest package are M1 Abrams tanks, which Kyiv has been asking for in recent months.

Ukrainian President Volodymyr Zelenskyy appeared frustrated over a “lack of specific weaponry” at the World Economic Forum’s annual meeting in Switzerland on Wednesday.

“There are times where we shouldn’t hesitate or we shouldn’t compare when someone says, ‘I will give tanks if someone else will also share his tanks,'” Zelenskyy said through a translator.

U.K. Prime Minister Rishi Sunak said last week that the British will send Challenger 2 tanks to Ukraine, upping the pressure on the U.S. to send Abrams tanks and Germany to send Leopard 2 tanks.

Sen. Tom Cotton, R-Ark., and other lawmakers across the political spectrum have voiced support for sending U.S. tanks to Ukraine.

“Now, it is the case that Germany’s tanks are a little bit better suited for Ukraine’s army and their supply and logistics systems,” Cotton told Dana Perino on “America’s Newsroom” on Thursday.

“But I’m confident, given the weapons systems we’ve already provided to Ukraine, that we could also support U.S. Abrams-made tanks going into Ukraine as well.”

US TRANSFERS MILITARY WEAPONS STOCKPILE FROM ISRAEL TO UKRAINE

The latest package of aid to Ukraine comes the day before Defense Secretary Lloyd Austin is set to meet in Germany with defense ministers from allied nations.

Emergency workers gather at the scene of a blast on New Year’s Eve, December 31, 2022 in Kyiv, Ukraine.
(Spencer Platt/Getty Images)

The U.S. has sent more than $26.7 billion in military aid to Ukraine since Russia invaded in February 2022.

The Associated Press contributed to this report.

Paul Best is a breaking news reporter for Fox News Digital and Fox Business. Story tips and ideas can be sent to Paul.Best@fox.com and on Twitter: @KincaidBest.