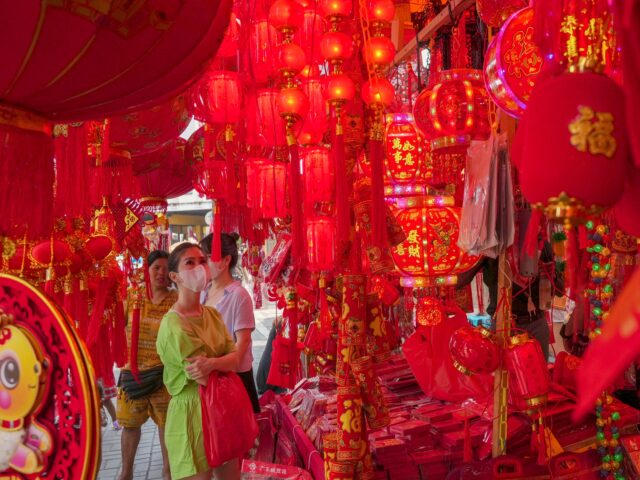 More than a billion people from around the world are about to celebrate the Lunar New Year and the arrival of the Year of the Rabbit.

Many of those welcoming the Lunar New Year are from China, where the festival is marked by a week of public holidays. But it is also an important event for people of Chinese descent in places such as Malaysia, Thailand and Singapore, as well as for Vietnamese and Koreans.

But what is the Lunar New Year and how is it celebrated?

Here’s what you need to know:

What is the Lunar New Year?

The Lunar New Year, as its name suggests, is based on the cycles of the Moon and falls on a different day each year – usually between late January and the middle of February.

This year, the celebrations start on January 22.

In China, the 15-day celebration is also known as the Spring Festival and is the most important holiday of the year.

The event is also celebrated in Taiwan, Mongolia, Vietnam and many countries in Southeast Asia – such as Indonesia, Malaysia, Myanmar, the Philippines, Singapore and Thailand. There are also raucous celebrations in Cambodia, even though it is not an official holiday there.

Businesses and government offices will close for seven days of public holidays in China and at least a few days elsewhere. Many cities around the region will be far quieter than usual.

Vietnam calls the festival “Tet”, South Korea, “Seollal” and Indonesia, “Imlek”. Vietnam also has its own zodiac, which does not include the rabbit, so it will celebrate the arrival the Year of the Cat.

In Indonesia, the world’s most populous Muslim country, millions of citizens of Chinese descent endured decades of discrimination during former President Soeharto’s repressive rule. They were forced to give up Chinese-style names and their own language, and not allowed to celebrate the festival openly. Lunar New Year only became a nationwide public holiday in 2002, four years after Soeharto was toppled.

The New Year celebration usually ends with the Lantern Festival although some countries have their own traditions as well.

In Malaysia, for example, the 15th day is known as Chap Goh Mei (15th night) in the Hokkien dialect and is when young, single women throw oranges daubed with their name and contact number into the sea in the hope it will be found by the partner of their dreams.

Why is it the Year of the Rabbit?

The Chinese zodiac is made up of 12 animals, starting with the rat and running through the ox, tiger, rabbit, dragon, snake, horse, goat, monkey, rooster, dog and pig. The dragon is seen as the most auspicious sign and there is often a spike in births during dragon years.

The zodiac is seen as crucial to understanding people, their health, wealth and love lives.

The rabbit year will start on Sunday and come to an end on February 9, 2024.

The rabbit – and anyone born in a rabbit year – is seen as quiet and thoughtful. Each zodiac animal also has a raft of lucky colours, numbers and directions. But each person’s prospects for the year and in life are also influenced by the “five elements” of wood, fire, earth, metal and water.

The last rabbit year was in 2011 when northeastern Japan was rocked by a tsunami triggered by one of the most powerful earthquakes ever recorded. More than 22,000 people were killed and the Fukushima nuclear plant destroyed. It was also the start of the Arab Spring protests and the year the United States announced it had killed Al al-Qaeda leader Osama Bin Laden.

How is the festival celebrated?

Customs and traditions often differ depending on country and the Chinese dialect the family speaks, but for everyone everywhere family and food are central to the Lunar New Year.

The most important part of the celebration is the “Reunion Dinner” when the family gathers on the eve of the new year to enjoy a banquet with dishes chosen not only for their taste but for what they symbolise.

In Malaysia and Singapore, yee sang is a popular appetiser to get the celebrations under way. Made up of shredded fruit and vegetables – such as carrot, ginger and pomelo – and topped with raw fish, usually salmon, the salad is placed in the middle of the table.

Diners gather around the plate, chopsticks at the ready, tossing the ingredients and the dressing together and sharing new year wishes with their fellow diners. The aim is to toss the yee sang as high as possible to ensure good luck in the year ahead.

A whole steamed fish – symbolising abundance – is also a must, or a whole chicken complete with feet and head. Mandarin oranges are ubiquitous, as are a stock of snacks and cookies.

Traditionally, the dinner always took place at home but as incomes have increased, many families have started going to restaurants for their meal.

In South Korea, people – usually the women – spend days preparing food for the festivities. A common and popular dish is ddeokguk, a spicy soup of rice cakes, and songpyeon, sweet rice cakes that are shaped like a half moon.

The frenzy of all the preparation, long drives to see family and friends, the socialising itself and the clean up afterwards can even lead to exhaustion – what Koreans call Myung Cheol Chung Hu Kun.

What are some of the traditions associated with the festival?

Many families will have a good clear-out ahead of the Lunar New Year, scrubbing the house from top to bottom, cleaning the windows and hanging red lanterns and calligraphy at the front door.

Cleaning is partly symbolic – to get rid of any bad luck from the previous year – but also practical. Red is the colour of happiness and good fortune.

Unleashing a barrage of fireworks is also crucial, even if, in some countries, they are banned.

At midnight, as the eve turns into the first day of the Lunar New Year, the streets of cities across the region will fill with the sound of exploding firecrackers. The display is supposed to drive away any bad luck that might be lurking.

Some people head to the temple on the eve – aiming to be the first to plant their joss stick – while others wait until the next day when they will also pay respects to their loved ones.

Many will also spend the holiday playing traditional games, such as the tile-based strategy game mahjong. Gambling is also popular, mostly among friends and family, although the region’s casinos also do good business during the new year.

What are red packets?

For many children, the joy of the Lunar New Year comes from counting how much money they have made from the red envelopes given out during the festivities.

Hong bao (Mandarin), lai see (Cantonese) or ang pow (Hokkien) are given by married couples and older family members to children and those who are single.

The cash inside needs to be crisp, new and denominated in an even number. Eight is the luckiest number while four should be avoided – it is usually associated with death.

What about lion dances?

Lion dances are loud and hugely popular, with troupes performing at shopping malls, businesses and outside office blocks, often to large crowds.

There are two main styles of dance – the northern and the southern – and it is usually performed by two people in colourful costumes. The dancer in front controls the giant lion mask – with fluttering eyelashes and a large red mouth – while the one at the back forms the body and back legs.

Accompanied by drums and cymbals, the performance is usually energetic and humorous. At the end, the troupe will throw oranges to the audience and who will try to push a red packet – a tip for the troupe – into the lion’s mouth.

Dances have become increasingly acrobatic in recent years – reflecting the northern traditions – with dancers launching themselves into the air and dancing on poles two or three metres above the ground.

Malaysia’s acrobatic troupes are considered among the best in the world – and youngsters even travel from other parts of Asia to learn the moves.

How do people greet each other at Lunar New Year?